Archaeotype is a computerized archaeological simulation. 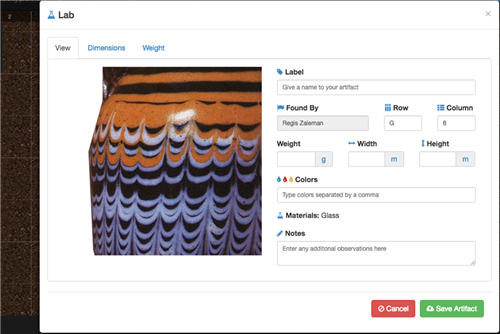 Developed as a network-based multimedia alternative to the textbook bound sixth grade curriculum in the Ancient World, Archaeotype provides students with a collaborative and interdisciplinary environment in which to uncover and interpret the past by presenting primary sources, both textual and artifactual, as evidence for the students' construction of history.
The excavation metaphor actively and purposefully engages the students in a collaborative effort that closely mirrors the work of the professional archaeologist as classroom and didactic constraints allow. Small groups of students unearth artifacts in four distinct quadrants. Using a set of on-line tools, the "archaeologists" measure, weigh and record each artifact. Graphical depiction's of the object may be rotated and magnified permitting in-depth visual analysis. To aid them in their research, students have at their disposal a series of on-line libraries developed by Dalton faculty on topics such as architecture, pottery, warfare and transportation.

As the students play the role of novice archaeologist, they engage in the following tasks: excavation, observation, inference, hypothesis, research and revision. The learning process evolves through a cyclic revision of three phrases:
Each time they excavate a new artifact, the cycle repeats itself, and a cognitive change ensues in the student's construing of history. In the final analysis, the student learns that History is a constantly evolving intellectual construct based upon "what the evidence probably obliges us to believe."